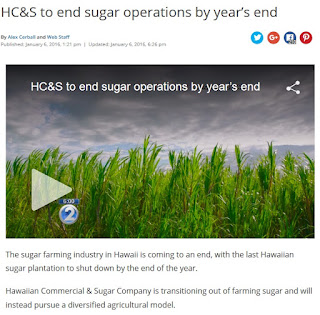 Regardless of how one defines the end,

the era of sugarcane production in Hawaii will be over by December 31 this year.

The end of the commercial sugarcane production in Hawaii was “set into concrete” a full year ago as was well explained with a 5-min nostalgic segment on KHON TV2 news back in January. Those closely associated with the Hawaiian sugar industry have known for some time that the complete phase out of sugar production in Hawaii was just a matter of time. Nevertheless, the “Operations Winding Down at HC&S” headline, dated Dec 6, in The Maui News (brought to my attention by Chifumi Nagai (a fellow Hawaii-based Sugarcane breeder)) evoked a considerable emotion in me and gave me the “end” dates applied above.

Having dedicated over half of my sugarcane breeding career in Hawaii toward the development of new and improved sugarcane varieties, the Hawaiian Sugar Industry became part of who I was and how I defined myself. I went through nine years of post-high school education to get an advanced degree (PhD), then dedicated my training and energy toward the development of new and improved sugarcane varieties for 14 years of my life, and now those advanced varieties have no future. They may find a home in a living museum of past varieties (possibly in a botanical arboretum on Oahu).  These varieties may end up (if they haven't already done so) in some international breeder's collection such as in Brazil. They should find their way into at least one of the two official world collections of sugarcane cultivars, one being in Coral Gables, FL, USA; the other in Kannur, India. Some of the varieties could also have a sufficiently wide adaptation as to be able to be successfully used elsewhere, either based on their own merits or as parents.

Having made this posting sound doom and gloom, the reality is, my education has obviously served me well elsewhere. And for the sixteen plus years we spent in Hawaii (1977-1993), our family got to enjoy living in paradise. I got to go “off island” a lot, primarily to the four sugar islands (Kauai, Oahu, Maui, and Hawaii), but also to Molokai occasionally, as part of my job. In the winter, I got to go to our Maunawili Breeding Station on a daily basis, on the Windward side of Oahu, and, during breaks, enjoy apple bananas, guavas, and passion fruit growing naturally around us. And, of course, I could bite into stalks of the sugarcane we were evaluating, just to “test” how sweet they were. The Church of Jesus Christ of Latter-day Saints (LDS) is quite prominent in Hawaii, and is home to the earliest LDS Temple built outside of the North American continent, so we benefited from its presence.

Relative to the Sugarcane Industry in Hawaii, here is some trivia that some of you may not have been aware of:

1) The sugar industry, had much to do with how and why Hawaii forcibly became a Territory of the U.S. in 1896, and ultimately, a State in 1959.  The best read on the history of Hawaii, in my humble opinion, is a book by Australian-born Gavan Daws,    "Shoal of Time -  A History of the Hawaiian Islands"

2) The sugar industry is largely responsible for the ethnic makeup of Hawaii today, (start 2 min into video for the relevant portion) through the importation of labor to facilitate the burgeoning sugar industry. This explains the substantial fraction of Chinese (5%), Japanese (17%), Filipino (14%), and Portuguese (<5%) as part of Hawaii's ethnic composition. As a side, it also explains Podagee jokes (not Polish jokes) in Hawaii (ex., Knock Knock. Who dare. One Podagee burgler). The continued blending of these groups through inter-racial marriages and rearing of children, make Hawaii the ethnic melting pot that it is today.

3) Sugarcane, in its heyday, was referred to as King Cane, owing to its dominance in Hawaii's agricultural industry.

4) Sugarcane impacted the paradise look of Hawaii, as sugarcane graced the landscape, the views that the tourists enjoyed. To me this was especially true on Maui, both at Pioneer Mill plantation (Lahaina), and at HC&S plantation (Pu'unene). HC&S represented the last remaining plantation and that was also always the largest (35,000+ acres), even during the heyday years.

5) The fibrous residue (called bagasse) remaining after the sugarcane juice was extracted from the stalk was used to generate all the electricity needed to run the mill, and excess was used to generate electricity, and put it on the grid. Over 40% of the total electric needs of Maui, Kauai and the Big Island were each met by the burning of sugarcane baggasse during the heyday years.

The commercial sugar industry in Hawaii began in 1835, so it remained viable for over 180 years. This is pretty remarkable, considering that sugar is the most international of any food-related commodity (like soccer in the sports world). We in the U.S. are competing with nations that pay their workers as little as $5 per day for their labor. We were able to stay ahead of the curve because of advanced irrigation and harvesting methodology; integrated pest management; disease, weed, and rat control; precise application of nutrients to the crop; advanced factory processes (sugar recovery and sugar quality); advanced control of ripening; and perhaps, most importantly (tooting the breeders' horn here), advanced genetics. And let's not overlook basic research. One notable example was the co-discovery of the C4 carbon-fixation pathway (Kortschak, together with Hatch & Slack out of Australia) to better understand how carbon is captured and accumulates as sucrose in the cell. All of this application of research and technology kept us in the game for a lot longer than many thought it would, so kudos to a lot of terrific scientists who were well supported by an appreciative industry. Really, it doesn't get much better than how lean and efficient we were in the manner we were able to conduct research. I got a far, far better appreciation of how efficient we were back then, when I later finished off my career with the USDA (so incredibly accountable to the public for every single breath we took and movement we made that precious little time is left over to conduct meaningful research).

I have in my possession, the final Hawaiian Planters' Record (Vol. 61, No. 3, 2009) of the Hawaiian Sugar Planters' Association (HSPA, now HARC, Haw'n Ag Res Center) which is “A History of the Experiment Station" (HSPA), co-written by Don Heinz and Robert Osgood. It outlines the advances that were made and the players that were involved at HSPA. I re-read its epilogue section with particular interest. If anyone has a further interest, please let me know.

Alohe Oe to an industry that was Hawaii's most important, but that, in the final analysis, simply couldn't continue to compete in such an international commodity as sugar represented.
Posted by BayouCane at 10:06 AM