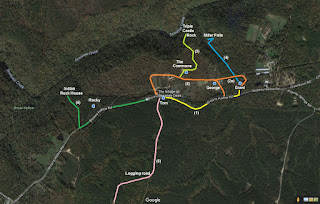 Grant Miller and I have taken up walking together each day, to get into a regular exercise regime. The goal is to walk briskly and to have at least a portion of the walk have a significant incline in order to build up stamina.  The most straight forward walks are on Browns Hollow Road itself.  The distance between our homes is about 0.4 mi (0.8 mi RT), so Grant drives his Polaris Ranger to my house, we then walk to his house and back, and that constitutes our walk for the day (Route 1).  With this route, we can alternate between his house and mine as the starting point.

From the beginning, we have chosen to make our daily exercise become more interesting by exploring the surrounding area, rather than limit ourselves to the same route every day.  We have made a circle by going on Browns Hollow Road, then taking the road to The Commons, then going by George's house (Route 2). We have also gone down to Triple Castle Rock and back, starting from the Commons area (Route 3). We also went to Miller Falls, and hiked to the bottom of the falls and back (Route 4).  We hiked up the logging road behind our house, to the highest point on the hill (Route 5).  Finally, we went to a feature described as Indian Rock House beyond Rocky Perkins' house (Route 6), and did some clearing of the trail with my cordless chain saw, and some heavy duty loppers.  Beyond the Village on Sewanee Creek, we hiked on a trail in Grundy Lakes State Park. 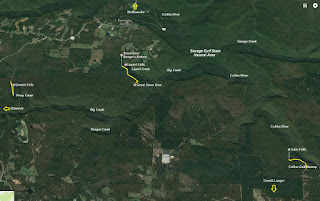 The last two weekends, and this coming weekend, to get our exercise, Grant and I joined up with "Meet Up" groups that are exploring Savage Gulf State Natural Area, which, in turn, is a part of South Cumberland State Park. 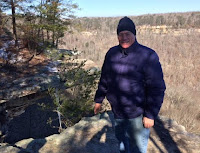 On Saturday, Jan 7, Grant Miller and I braved 10 F temperatures to join a "meet up" group at the Stone Door Trail near the town of Beersheba Springs. There were two park rangers present to lead two groups from the ranger station. An older, more experienced ranger lead a group of three other hikers on a 7-mile hike into Savage Gulf. Our group, consisting of Grant, myself, and Aaron Reid (the other park ranger) went with the other group as far as the Stone Door feature, stopping at strategic lookout points on the surrounding bluffs, including the Laurel Trail Overlook. I thoroughly enjoyed the experience and learned a lot about the area from the two rangers. At the end, we also hiked down to Laurel Falls, just behind the ranger station (a 10-min hike in each direction). On the edge of the bluffs, wind chill was well below 0 F. We were well dressed for the occasion so we did fine. The hike was 2 miles, round trip, classified as moderate difficulty. 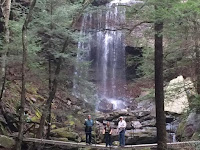 This past Saturday, Jan 14, we went on a "meet up" group hike, this time on the Southern end of Savage Gulf State Natural Area, on the Collins Trail which leads to Suter Falls. Access is from the town of Gruetli-Laager, which is only 6 miles from where we live, as the crow flies. The trail was more strenuous than at the Stone Door (last Saturday). Suter falls is fronted by a large and impressive semi-circular overhang. For most of the hike, Grant and I had the Park Ranger, Murray Gheesling, to ourselves.  Late in the hike, we were joined by a girl.  The hike was 2 miles, round trip, classified as strenuous. 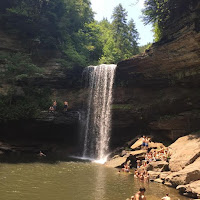 This coming Saturday, Jan 21, we will join a meet up group scheduled to take a Nature Hike to Greeter Falls near the town of Altamont.  All I know about Greeter Falls is that kids love to dive into the pool at the base of the Falls from a height of about 25', I believe.  Because of its proximity to Altamont, it could well be the most visited Falls in the area.  It may be the largest volume falls in the Savage Gulf State Natural Area, as well.  The hike is 1.0 miles, round trip, no classification.

Posted by BayouCane at 1:02 PM