Top Ten LDS Temples of Special Significance to Me 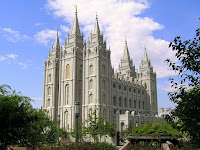 Salt Lake City Temple -- This is the temple I knew growing up.  When I thought of temples, this is the one that always came to mind.  It is the first temple I ever went inside of.  As a teenager, I went there with a youth group to do baptisms for the dead.  As a brand new missionary, it is where I received my endowments.  It is where young missionaries gathered to listen to the voice of then apostle, Harold B. Lee, in the large assembly hall in the center of the temple. It is where Judy and I were married for time and all eternity.  Interestingly, when I was attending graduate school at the University of Minnesota in the twin city area, Minneapolis Stake was assigned to the Salt Lake Temple, and St. Paul Stake was assigned to the Washington D.C. Temple. 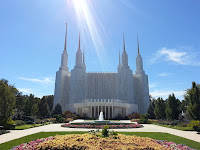 Washington D.C. Temple -- This was a greatly anticipated temple while I was on my mission.  The ground breaking for this temple represents the completion of my mission in that all of the missionaries of our mission, the Eastern Atlantic States Mission, were invited to the ground breaking ceremony.  The missionaries nearest to completing their mission, myself included, remained at the mission home in Bethesda, MD and were sent home from there shortly following the ground breaking ceremony.  I very distinctly remember the walk up the hill through the woods to the temple site, and the key speakers, namely Paul H. Dunn and Hugh B. Brown, both illustrious General Authorities.  Also, our daughter, Julie, and her husband, Matt Bertasso, were married in the Washington D.C. temple.  My brother, John and his wife Gloria were in attendance, which was a blessing to us.

Provo Temple -- This temple was built while I was attending Brigham Young University (BYU).  It is the first temple that I got to go to before the temple was dedicated.  I went to the open house prior to the dedication of this temple.  Following the dedication, I was able to go to this temple several times as a BYU student.  Years later, after our family returned from Hawaii to Utah in 1993, we lived in the tree street area across from Deseret Towers.  Our chapel was on the "other" side of the Provo Temple, meaning that we literally walked past the temple each Sunday to go to church.  It is my understanding that the Provo Temple is the busiest temple that the Church has. 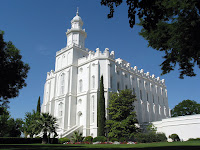 St. George Utah Temple -- After my parents retired, they spent part of their time in St. George, Utah.  I would have the opportunity to visit them, and, on occasion, would go to the St. George Temple with them.  Those were pleasant memories, making this a special temple to me.  The St. George Temple is the oldest active temple in the Church, since it was the first temple dedicated in the State of Utah, beating out the Manti, Logan, and Salt Lake City temples in this category, all of which were built in the 1800's. 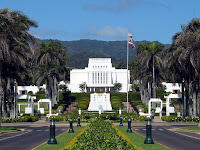 Laie Hawaii Temple -- When Judy and I lived in Hawaii, we got to know the Laie temple very well, and went to the temple about once a month for many years.  We were most fortunate to have a temple this close,  about 20 miles from where we lived. Associated with the Laie temple are 1) the statue of Ma Mahuhii on the temple grounds.  Joseph F. Smith served his first mission in Hawaii at the tender age of 15.  Ma Mahuhii assumed the role of surrogate mother to young Joseph for three months when he was seriously ill on the Island of Molokai. Many years later, when Joseph F. Smith returned to the Hawaiian Islands as a Prophet, he had the chance to see Ma Mahuhii as an old woman, and recognized her.  He dropped everything, ran to her, hugged her tightly, and exclaimed, "Mother, my Mother" with tear filled eyes - a very tender moment. 2) the statue of Lehi blessing his youngest son, Joseph, who the Hawaiians believe they descended from, 3) four large friezes on each of the four sides of the Laie temple at the top, on the North frieze depicts events in the Book of Mormon; West frieze, events in the Old Testament; South frieze the New Testament and Apostasy; and East frieze, events associated with the Restoration.  The freezes were made by J. Leo Fairbanks, with help from his brother, Avard Fairbanks.  While I worked at the Hawaiian Sugar Planters' Association, we hired Dan Fairbanks, who was the grandson of Avard Fairbanks.  Dan and his father were skilled at sculpturing, so the trade was handed down from generation to generation.  I learned much from Dan about his grandfather. 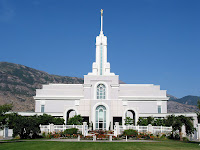 Mount Timpanogos Utah Temple -- We got to witness two marriages of relatives in this temple.  We witnessed the marriage of Blaine Tew to his bride, Leslie Tew.  We had to smile when an old lady entered the chapel area where the groom's family was on one side of the aisle and the bride's family on the other.  She said, "Which side of the aisle are the Tews on?"  We responded, "Take your choice."  We also witnessed the marriage of Wayne McCandless to his bride, Juanita, this marriage being for time, since Juanita had been previously married in the temple for time and all eternity to her first husband who passed away at an early age.

Baton Rouge Louisiana Temple -- Judy and I attended the Baton Rouge Temple many times while living in Louisiana.  The temple was completed six months after I arrived in Louisiana.  Since Judy joined me in Louisiana about 10 months after I arrived there, it was already dedicated by the time she arrived.  Judy was a temple worker in the Baton Rouge temple for nearly ten years, and served as a coordinator for most of those years.  I was in the Bishopric over most of the years we live in Louisiana, and as such, was not able to serve as a Temple Worker, the last two years, that we lived in Louisiana, I was able to serve as a Temple Worker, and had the opportunity to officiate in the endowment ceremony a handful of times before we moved to Tennessee.

Vernal Utah Temple -- While having never been in this temple, it is of special significance, because it represents the temple in the area I grew up in.  It is the first temple that took an already existing building, the Vernal Tabernacle, and converted it into a temple.  It is the temple that my brother, Fred, served in for many years.  Vernal is also where my great grandfather, Daniel Vester LeRoy is buried. 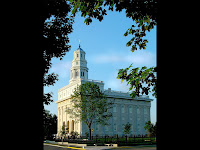 Nauvoo Illinois Temple -- While Judy and I have been to the temple site, before the rebuilding of the Nauvoo Temple occurred.  We have not gone to the Nauvoo Temple since it was rebuilt, but it is a temple of historical significance, and we plan to go to Nauvoo.  It's on our bucket list.

Provo City Center Temple -- Before leaving Utah in 2000, the Provo Stake that Judy and I lived in, used the Provo Tabernacle as the site of our stake conference.  We became quite familiar with the Provo Tabernacle, and had our favorite place to sit when we went there.  I had been in the Provo Tabernacle many times, dating all the way back to my undergraduate school years.  I remember a talk give by Elder Bruce R. McConkie while there, and to this day, am certain that I heard him speak of a day when we will see an Asian apostle. The tabernacle burnt down on December 17, 2010.  The Church decided to rebuild the Tabernacle into a Temple, and the Temple was dedicated on March 20, 2016 by Apostle Dallin H. Oaks, a native of Provo, Utah.