My experience with soilless sod.

Yesterday, I went to Home Depot in Winchester TN (actually Decherd TN) to purchase Kellogg's Garden Soil, bracing to pay $6.77 per 2 cu ft bag.  To my surprise and delight, as soon as I pulled up to the Garden area, I saw Kellog's Soil in the clearance area, being sold for $2.30/cu ft (=$4.60/2 cu ft).  Instead of getting 5 bags (=10 cu ft) for $33.85, I got 10 bags on clearance for $23.00.  I should have gotten more, and am kicking myself for not doing so.  As far as I'm concerned, Kellogg's Garden Soil runs circles around similar Miracle Gro ($7.97) and Scotts brand products.  I told Jim DeLong and Bob Holmes about this steal-of-a-deal, and I believe they were both able to take advantage of it. 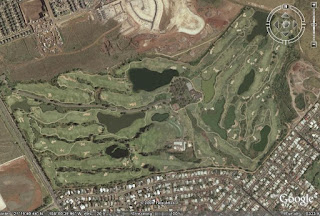 Lifting from my Tew's Life on the Bayou blog, while living in Hawaii, I took a side interest in turfgrass after I discovered how fast, easy, and profitable it was to grow sod on black plastic. It was an accidental discovery, not something I read out of a book. My interest in turfgrass led me to spend weekends establishing people’s lawns. Before I left HSPA in 1990 and joined Southern Turf Nurseries (STN) as their Hawaii GM, I had established close to 100 lawns. STN was in the golf course grassing business, so joining this company was definitely going from the minor league to the major league…going from 1/5 of an acre per project, to 270 acres on our first golf course grassing project, which was the Hawaii Prince Golf Club at Ewa Beach (see GoogleEarth pic above). My stay with STN only lasted a little more than 2 years, when project opportunities dried up as a result of Japan going into a depression. 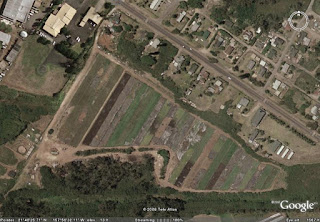 While at STN, I established the largest sod farm on Oahu from the ground up, meaning that it was my job to clear the land (dozer), set up the irrigation system, create separation between beds (tractor trencher), build a fence, and purchase temporary buildings and appropriate farm equipment. For several years after leaving Hawaii, the 40’ wide black plastic beds with 6” width trenches (up to 3' deep) between them could be seen from space within the city limits of Kahuku, Hawaii (see GoogleEarth pic above). We only had about 10 acres to work with, but we could turn over sod every two months by growing sprigs sandwiched in ½ inch thick organic medium on black plastic. The soilless sod was mainly used for lake banks and areas difficult to establish with sprigs on golf courses.

The soilless sod could also be flipped upside down, and run over with a verticutter (power rake) to create high-quality sprigs.

We tested dozens of products as the medium for growing soilless sod.  Kellogg's products consistently beat out other brands, including Miracle Gro and Scotts.  We finally ended up using Kellogg's Amend as our medium, but I would guess that their Garden Soil would produce similar results.  In Hawaii, we bought Amend by the container load.  I was disappointed that we couldn't get it in bulk.

Soilless sod works best with sprigs, and turfgrass species that are rhizomatous.  All of the important warm-season grasses (such as Bermudagrass and zoysiagrass) are rhizomatous.  Unfortunately, most of the cool season grasses are bunch grasses; one exception is Kentucky bluegrass, which is mildly rhizomatous.  I would like to experiment with zoysia and Kentucky blue and see what happens this summer.  Can I go from sprigs of zoysia or seed of Kentucky blue to marketable sod over the summer?  Which soil media works the best here?  I shall find out.
Posted by BayouCane at 3:52 AM