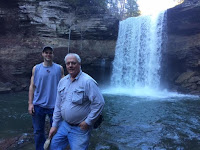 I've got a long way to go.  Six down and seventy four to go.  Adventures to look forward to.
Posted by BayouCane at 2:42 AM