Getting to know the native trees, bushes, and vines of the South Cumberland Region 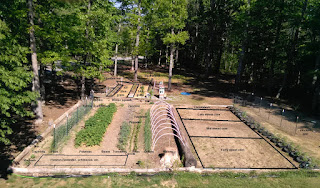 Lately, I have taken a keen interest in the trees, bushes and vines that make up the larger flora of the South Cumberland Region.  I found a Virginia Tech University website that has been most helpful in the process.  It contains Dendrology Factsheets, one tree, bush, or vine species per page.  Dendrology is defined as the scientific study of trees.  The species are arranged by family, then genus.  Since each tree they described, has a map of the area it naturally occurs, I could hone in on only those species that naturally occur in the South Cumberland region of Tennessee.  When I did this, nearly 100 species remained  I list only those species, and have kept them arranged by family, then  by genus, and finally by species.  There is a Fact Sheet for each species.  I am now in the process of identifying every tree, bush, and vine on our 1.4-acre property, using these Fact Sheets.  Surrounding our garden are trees, and trees create shade.  Though surrounded by trees, the garden area is open enough so that every plant in the garden receives at least a half day of full sunshine, at least on those days where is sun actually shining.  Lately, we have been getting a lot of rain, so some plants are starting to get a little bit etiolated.

So here is the list, again by family, then by genus and species.  Frequency of their occurrence in the Southern Cumberland region and occurrence on our 1.4-acre property are noted, where A = abundant; B = Common, C = Occasional, D = rare, I = introduced, and "-" = either never seen or haven't recognized it for what it is:

Gardening on the Cumberland Plateau

Since I have returned to normalcy, and have devoted the bulk of my hours outdoors each day, instead of doing meaningless nonsense behind a computer each day, I have taken up gardening with a passion.

Here are some pics that exhibit the effort I have made to do a first-class job of gardening.  From our house roof, looking eastward. 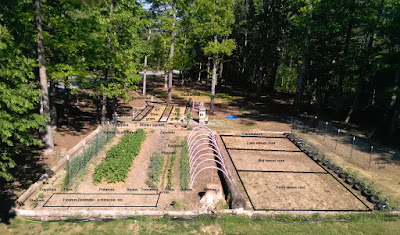 Take note of the two double rows of potatoes.  The rightmost row was planted by creating a 6" deep 2" wide trench down the row and filling it with peat-based worm castings, then planted with potato seed (pieces). Next to it, the 2nd row was done in a similar manner except filled with peat alone.  Next to it, the 3rd row was done similarly except the original soil was used to fill the trench after the potato pieces were installed.  The leftmost row was planted using the classic shovel method.  What has been the most amazing thus far is the superior growth of the potatoes planted in peat-based worm castings vs peat alone.  I would guess that there is at least 30% greater growth with the worm castings. 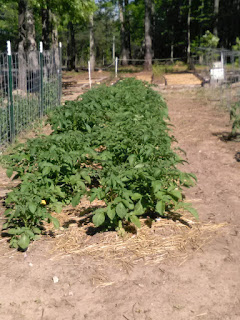 On the right half of the garden, I elected to plant three squares of sweet corn to spread out the harvest.

Square #1 (closest) was planted with 'Early Sunglow Hybrid' on April 10.  It has a 63-DTH (days to harvest) period, meaning that I anticipate harvesting it beginning on June 12.

Square #3 (farthest) will be planted with "Hawaiian Supersweet #9' on May 15.  With an estimated 80-DTH period, I anticipate harvesting it on August 3.

It will be fun to see when we do start harvesting these three varieties of corn.  In Square 1, we companion-planted the area with sweet potatoes.  We did this last year in the sweet corn area.  The sweet potatoes basically just get themselves established during the corn cycle, and then take over the garden area the corn was in, AFTER the corn has been harvested and the stalks removed.  We got a lot of sweet potatoes in the corn area last year and hope to do the same this year, at least in the first and second squares. 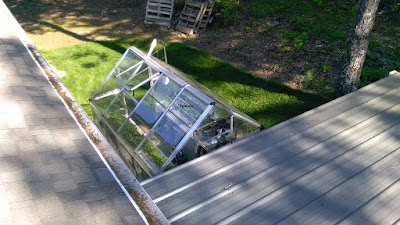 Looking southward, we have our little greenhouse which provided the plants that were transplanted, including tomatoes, peppers, squashes, and melons.  We have lettuce and spinach growing in the greenhouse year around, providing greens for the table year around. 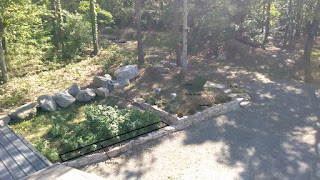 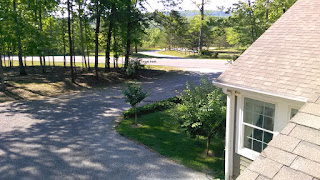 Looking northwest, we have our driveway fronted with a strawberry patch.  We also have our cherry tree and plum tree, already in their 4th year.  Amazingly, the plum tree, small as it was, produced an amazing amount of plums.  We dehydrated the plums and are still eating them.  On the other side of the house, we have a four year old apple tree and a newly planted peach tree.


Going back to the first picture, the zoysiagrass, Bermudagrass, and Kentucky bluegrass is established on top of black plastic (polyfilm) in a layer of organic garden 'soil'.  I am trying to see how fast I can plant sprigs (zoysia, Bermuda) and seed (KY blue), and get harvestable sod (capturing ALL the roots, since it's planted on plastic).  The inner row of blueberries is 'Pink Lemonade' blueberries, and the flanking rows are 'Sunshine Blue'.

We now have three hives (colonies) of bees.  We planted buckwheat (50' x 50') area in the back of our property to allow us to have buckwheat honey.  There seems to be a strong divergent opinion on the flavor of this very dark honey.  Some people love it and swear by it.  Others don't care for its rather distinct molasses-like flavor.  We'll see...
Posted by BayouCane at 3:59 AM No comments: