Hiking around the lakes in Grundy Lakes State Recreational Area

Over the past several months, I have made a DAILY ROUTINE of walking around the main lake at Grundy Lakes State Recreational Area (GLSRA) in Tracy City, TN. 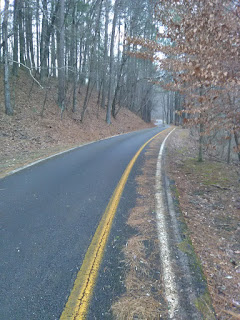 In doing this as a daily routine, I have become familiar with many of the features and idiosyncrasies of the Lakes area.  For starters, I have discovered the several trails that can be used to keep the hike around the lake interesting.

Trail hiking variations to get around the Park are numerous.  The most basic walk is to stay on the road that goes around the two largest lakes in the park, and make a complete circle, beginning and ending at the main parking area in the Park.  The distance to make the complete circle staying on asphalt the entire way is almost exactly 1.5 miles.  One day, I took pics on this route and posted them on Facebook - Friends of Sewanee Creek website (See Feb 7, 2017 date). 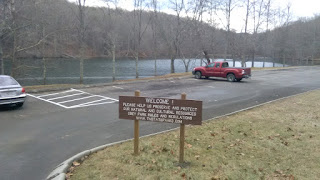 There are four lakes in the Park with earth-fill dams that created those lakes.  The main lake is much larger than the other three lakes combined...kind of like the State of Hawaii.  You have the Island of Hawaii that is substantially larger than the other three heavily populated islands, namely Maui, Oahu, and Kauai (in descending order of size).  Hawaii has other smaller, less populated, less significant islands that often don't get counted.  Similarly, Grundy Lakes has smaller, uncounted minor bodies of water, some created by the beavers in the Park.  I find the comparison between Grundy Lakes and the Hawaiian Islands rather interesting and useful in explaining the Park to those unfamiliar with it.

Geological History: The geological history of GLSRA is a microcosm of the history of the Cumberlands.  The Cumberlands themselves were formed by upheaval of plateau lands that were, in an earlier era, bogs and sea shores, thus explaining the finding of seashells in rock formations, and layers of coal in shale rock.  Shale rock is replete throughout GLSRA, and seams of coal can easily be found.  Where there are deposits of limestone, one would expect to find caves, which are plentiful in Kentucky and Tennessee.  I don't know of any caves within the Park, but there may well be.  There are caves in close proximity to the Park. 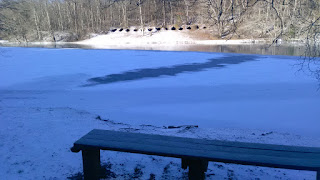 Modern History: The main lake is surrounded by Coke Ovens that were used between 1884-1927.  The coal came from the GLSRA and surrounding areas in Tracy City.  Closer to Tracy City proper, some 120 coke ovens were built.  Another 120 ovens were later built within the boundaries of GLSRA.  At the time, the main lake was non-existent, or at the very least, much smaller.  Ultimately the main lake was created, and part of the original railway went under water.  Today, one of the attractions of Grundy Lakes, often featured in advertisements of the area, is the partially restored coke ovens.  One thing I am enjoying doing, is asking old timers in the Tracy City area, where the coke was transported to after it was put on the rail cars, to support the steel industry.  The rail from Tracy City goes through Monteagle, then Sewanee, then Cowan, and, from there, through a major tunnel to Stevenson AL.  From Stevenson, it could go South all the way to Birmingham AL (major steel city), or it could go to north to South Pittsburg (name logically taken from Pittsburgh PA), and east to Chattanooga.  The old timers all seem to have different stories about where the coke ended up, and it's fun to hear each different version.

Flora: The main evergreen trees in GLSRA include native Virginia pines and introduced Loblolly pines.  There are a few native hemlock trees.  Deciduous trees include the oaks (primarily red and white oak species), hickories, beech (retain their leaves through the winter), yellow poplar, red maple, sweet gum (spiky balls hang from the trees like Christmas ornaments), sycamore (smooth balls hang from the trees that explode when hit in the wintertime) and others.  Two invasive bush sized plants found throughout the Park are the privet and the autumn olive. 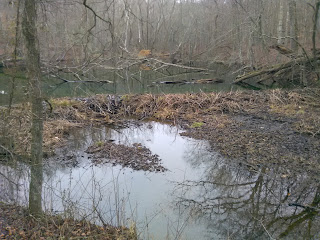 Fauna: Animals that I have come to appreciate within the park include wild ducks and geese.  Some are here year around, and others, like the Canada goose, are migrating.  The beaver makes its presence known in a major way, building dams and causing the lakes to fill fuller than they were designed to be filled.  I occasionally see deer while hiking around the lakes.
Posted by BayouCane at 5:08 AM