Our trip to Australia and New Zealand

This is a travelog of our trip to Australia and New Zealand during 26 Feb - 17 Mar 2018.  Judy and I traveled with our son Neal, and my niece Patricia Potts and her husband, Dan.  The trip consisted of 2 full days in Sydney, Australia; 2 weeks on a Holland America cruise ship...destination New Zealand, departing and returning to Sydney Harbor; then spending two additional days in Australia before departing home.

WED (28 Feb)  We finally made it to our hotel (BreakFree on George) in downtown Sydney by 12:15 PM.  After settling in, we traveled by bus to the famed Bondi Beach on the South side of Sydney, arriving at 3:00 PM.  I watched our belongings while everyone else took to the water.  We returned to the hotel around 6:00 PM.  Our hotel was in the so-called Chinatown neighborhood of Sydney, so we ate dinner in a Chinese restaurant before crashing for the evening.


THU (01 Mar)  Early in the day, Judy, Neal, and I walked up Sussex Street to Darling Harbor.  We returned, and joined with Dan and Patricia on a free walking tour from near our hotel to the famed Harbor Bridge - Opera House area.  We realized that we had to break away and walk briskly back to our hotel (nearly 2 miles away) in order to catch the ride to board our cruise ship.  We boarded the ship at 4:00 PM, and about two hours later, we were on our way to New Zealand. 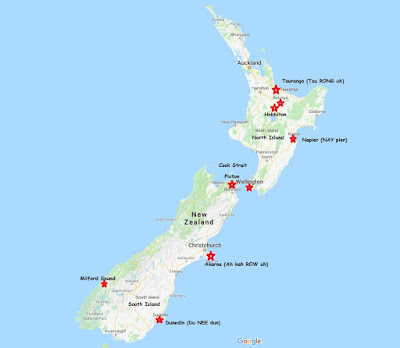 SUN (04 Mar)  In the early morning, we first saw land, as our ship entered Milford Sound.  It was an overcast day, and had been raining in the area overnight, so that when we entered, there were numerous waterfalls coming off the very steep mountains.  Milford Sound, like the other two sounds we visited, are technically fjords, rather than sounds, and this whole area of New Zealand is referred to as Fjordland.  Kelley, our outdoor expert on board, informed us that she had never seen waterfalls in Milford Sound as full as they were on this trip, so we got a special treat.  The ship also entered Doubtful Sound and Dusky Sound before going around the bottom of the South Island of New Zealand.  Going around the bottom (roughly 47 degrees South) to get to the east side of the island, is the furthest south I have ever been in all my travels.

MON (05 Mar)  We ported at the City of Dunedin (Du NEE dun) in the morning, and spent most of the day touring around this most interesting town.  It is a college town with a rich history.  We also went on a land tour to a beach outside the city that took us over some steep terrain in getting to our destination.  There, we got to see fur seals up and close.

TUE (06 Mar)  Overnight, we traveled to Akaroa (Auk ah ROW uh).  The harbor at Akaroa was too shallow for us to port, so we used tender boats to get ashore.  Akaroa Bay was formed by an extinct volcano.  We had booked a tour on a sail boat in the bay, which was a fabulous experience, highlighted with travel near mussel and salmon farms inside the bay area, and Hector dolphins guiding us back to the port after we got to the furthest point on the sail boat ride.  The tour guide was a delight as he rehearsed sailing stories from his own life, and areas of the world he had seen.

WED (07 Mar)  Overnight, we traveled to the town of Picton.  The weather was bad, with a lot of wind and rain.  We went into town, and visited a small aquarium, but missed out on an opportunity to ferry to a highly rated bird sanctuary, due to the weather.  It was Judy's birthday, so Dan and Patricia arranged for the evening servers at dinner time on the ship to join together in singing happy birthday to Judy, Indonesian style.

THU (08 Mar)  Overnight, we traveled across the Cook Strait to Wellington on the North Island.  Wellington is the capital of New Zealand.   The highlight of our stay in Wellington was to take a tour of the Weta Digital Workshop.  Weta is the second most important developer of special effects for movies in the world, and its owners were responsible for the making of The Hobbit and the Lord of the Rings series in New Zealand.  They have had a hand in the development of 150 full feature movies, many of which are very familiar to most of us.  While in Wellington, we also went to their very impressive museum near the wharf downtown.  The museum had an entire floor dedicated to the Maori culture.

FRI (09 Mar)    Overnight, we traveled to the city of Napier (NAY pier).  The weather was so rough that we were unable to port, so we headed on toward Tauranga (Tau RONG uh).

SAT (10 Mar)  In the morning, we arrived at Tauranga.  One of the trainers in the gym told me that this was his favorite port.  A land tour took us through Tauranga, and toward the interior of the island, out to Rotorua.  There, we went to the Whakarewarewa Thermal Village, a Maori village inside a geyser area.  We got to see the Maori people put on a most impressive performance, somewhat reminiscent of the Polynesian Cultural Center, with much dance and story telling. 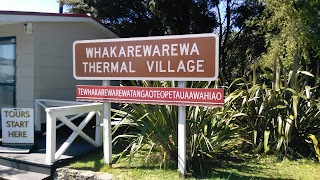 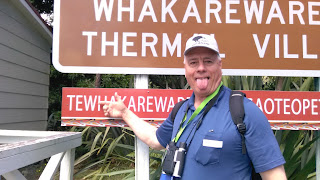 From Rotorua, we went to the Hobbiton, which was highlight of the entire New Zealand trip for many.  The weather was great for a change, and the Hobbiton was everything we had hoped for.  I think for most, it exceeded their expectations.  There were some 44 little round-door homes against the side of a hill, and other buildings to give the feel of an entire village. 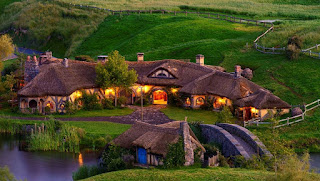 We thoroughly enjoyed the travel to and from the Hobbiton, seeing more agriculture (especially kiwi fruit farms) than we had seen on previous stops.  The route back to Tauranga took us through an impressive mountain range.

SUN (11 Mar)  Due to Cyclone Hola bearing down on the North Island, the cruise ship was forced to abort plans to go to Auckland and beyond, and to go back toward the Cook Strait between the North and South Islands, and return to Australia from there.  However, all was not lost, since this allowed us to return to Napier and port this time with much improved weather.


We visited Napier between 3-7 PM, and spent most of our time at an impressive aquarium, where we got to see a living Kiwi bird foraging in its darkened area inside the aquarium facility.  Judy held a stuffed Kiwi, which the aquarium personnel had available for photo shots. Napier had to be rebuilt after a massive earthquake, and was rebuilt during the art deco period, so it has the art-deco South Beach Miami look.  The beach was made of dark-colored small smooth pebbles rather than sand, with the Norfolk Pine as the primary tree species behind the beach area. 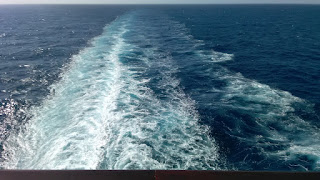 THU (15 Mar)  We disembarked at 7:00 AM and took a taxi back to the BreakFree on George Hotel where we had stayed earlier.  Shortly thereafter, we went to the train station nearby and took the train to North Sydney just across the Harbor Bridge from Sydney.  Judy and I elected to walk back across the bridge to the Sydney side of the harbor, and there we met up with the rest of our group, who had elected to return to the Sydney side via the train.
We walked to the Circular Quay (sounds like Key), and from there, took a ferry to Manly and Manly Peninsula, followed by a brief walk to the famed Manly Beach.  Following our return to Circular Quay, we walked to the iconic Sydney Opera House, and paid to take a tour of the opera house.  I was very impressed with the architecture of this multi-faceted building, inside and outside, and the story of the building's history.  We briefly visited the  nearby Botanical Garden afterward, then returned to the hotel via the bus.

FRI (16 Mar)  Our final full day in Australia was spent on a country tour which included a visit to a zoo north of Sydney, and several stops in the Blue Mountain area northwest of Sydney.  The visit reminded me of the Cumberland Plateau where we now live in Tennessee.  Many of the animals we saw at the zoo are unique to Australia, including the kangaroo, the koala, and a wide range of bird species, including the emu and kookaburra.


SAT (17 Mar)  We woke up at 5:30 AM Saturday morning in Sydney, and by the end of a 42-hour Saturday (crossing the Int'l Date Line), was home in Tennessee by 6:30 PM Saturday evening, having traveled nearly halfway around the world.