Completing the Sewanee Creek Trail and Enjoying its Features

In early Spring 2019, I completed the Sewanee Creek Trail from the top of the bluff near the 'Triple Castle' rock outcropping all the way down to Sewanee Creek (about a 400' drop in elevation from 1,800' to 1,400').  Soon thereafter, I found an easier path to the creek from about 2/3 of the way down, going westward to the creek, thus creating what has become (at least for me) a commonly-used loop toward the bottom...a gentle way down and a steep way back up to where the two paths split. 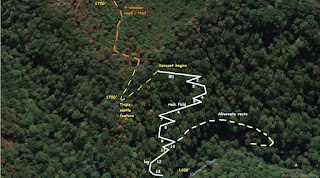 Cool features of the Sewanee Creek Trail include the 'Triple Castle' feature at the outset.  This feature consists of three rock outcroppings end-to-end that can be negotiated, with the last (3rd) outcropping providing an incredible view of the entire Sewanee Creek Gulf. I have taken visitors to, and personally photographed the Triple Castle feature on several occasions.

There is the trail itself, that passes through multiple bluff regions, a substantial rock field, large trees (featuring, among other species, large hemlock and beech trees in abundance), a cave-like rock shelter (steep route) and a lower flat area from which the Creek can be easily viewed (easy route).

There is a substantial cave on the opposite side of the Creek waiting to be explored.

There is the 'island', that is special in and of itself.


There is the stream of water that flows out of the the side of the mountain, that, during dry periods, exhibits greater flow than Sewanee Creek, itself.

There is 'the narrows,' where the stream is funneled, and the floor of the stream consists of large smooth slabs of rock, jigsaw puzzled together, creating a table-top stream bed.


There is so much more to explore, both upstream and downstream.  I have done some exploration, and plan to do much more in the future.

Creating additional trails leading to Sewanee Creek, and ultimately connecting to the trail I have already built, could be done.  I'm thinking primarily of Miller Creek downstream, and the Creek on Lot #21 upstream, both of which feed into Sewanee Creek and both of which have substantial waterfalls that would make these additional trails highly desirable.
Posted by BayouCane at 10:16 AM 1 comment:

The 12.5-mi Fiery Gizzard Trail that goes the full distance between Tracy City and Foster Falls, is one of the best known trails on the Cumberland Plateau.  It received national attention after being ranked one of the top 25 hiking trails in North America by Backpacker Magazine. 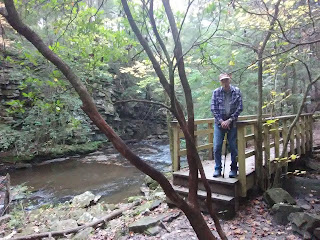 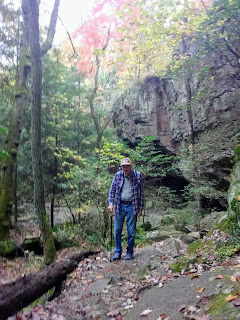 A much more ambitious loop on the Fiery Gizzard Trail begins about 0.2 mi beyond Sycamore Falls where the trail splits, and ultimately re-unites roughly 3.0 miles later, near Ravens Point, a very scenic lookout.  The named Fiery Gizzard Trail follows the the river and is classified as strenuous, whereas the Dog Hole Trail, which promptly goes up to the top of the bluff, is as easy as a "walk in the park," once on top.  The only time I have hiked to Ravens Point was on February 27, 2019.  I used the Dog Hole Trail in both directions, though I had initially planned to do the loop.  The trail was longer than I had initially realized, and I was pretty well worn out by the time I got to Ravens Point, so I was in no mood to take on the much more strenuous and technically difficult trail route going back.